Transparency and Accountability at the Frontlines of Justice: Freedom of Assembly 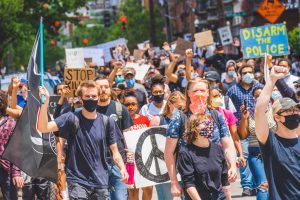 Enshrined in international law and an established global norm, the freedom of peaceful assembly is a fundamental right to collectively express, promote, pursue, and defend a common interest without fear of retribution. Beyond its normative value, freedom of assembly is essential to the functioning of open government and for healthy societies. For participation to be meaningful and effective, it cannot be limited to elections or formal, “invited” channels of engagement with officials. Freedom of peaceful assembly is also a critical form of political participation in a healthy civil society. It shapes debate, public policies, and strengthens governance by allowing diverse and different ideas to be expressed and heard, including the voices of minority or opposition groups.

Recent protests in the United States and beyond highlight the importance of establishing democratic norms and institutions to uphold the right to assemble, especially under the strain of social and health crises. There are a number of concrete actions OGP member countries can take, from creating channels for citizen expression to establishing guidelines that inform state responses to online and offline protests. Ultimately, designing legal and institutional protections for public assembly during times of peace will help countries maintain their democracies during times of turmoil.

In Northern Ireland, parades, processions, carnivals, and commemorations are core to cultural, political, and religious traditions. Unfortunately, parades have been marred by— and are sometimes the impetus for—sectarian violence. In 1998, preceding the Good Friday accords, the Northern Ireland Parades Commission was established to approve permits for parades. While it is not without critics, its establishment offers two positive lessons for countries struggling to balance public order and safety with freedom of assembly:

Despite initial success, there has been concern about the Parades Commission. In 2013, at the invitation of the UK government, the UN Special Rapporteur on the Rights to Freedom of Peaceful Assembly and of Association issued a report on the sensitive issue. The Northern Ireland Human Rights Commission followed with another report on how best to balance the competing demands for assembly and security. The two human rights bodies’ reports, followed by action by the Parades Commission, resulted in a framework called “Resolution by Dialogue.” It mapped the competing considerations of different human rights (e.g., freedom from violence and religious freedom) and invited participants and affected communities, including minority groups, to suggest improvements. The Resolution also emphasizes voluntary dialogue as a necessary first step before escalation to legal means such as banning a particular parade.

The Ugandan constitution guarantees citizens the freedom to assemble and demonstrate peacefully. However, laws such as the Public Order Management Act (POMA) give police wide-ranging power to regulate and prevent public meetings. This provision has enabled the police to justify arresting and detaining opposition leaders and their supporters at political rallies.

In the face of these challenges, CSOs have stepped up to defend the freedom of assembly. In 2016, Solidarity Uganda—a nonprofit organization that builds capacity with community-based organizations—created a rapid response system to assist protesters facing state-sponsored violence and repression. Operated full-time, the system has an emergency hotline that protesters and others can call for emergency assistance. When activists are arrested, the hotline coordinator connects them with a pro bono lawyer who assists with bail and representation if they choose to sue the state. The organization also provides medical and psychosocial care.

The UN Special Rapporteur’s Guidance on Freedom of Assembly

In 2010, the United Nations Human Rights Council established the Special Rapporteur on the Rights to Freedom of Peaceful Assembly and of Association. The rapporteur uses a set of guidelines and indicators to assess how a country manages assemblies. These indicators include:

The UN “Draft General Comment No. 37 on Article 21 (Right of Peaceful Assembly) of the International Covenant on Civil and Political Rights”

The Human Rights Committee is currently completing a General Comment on the Right to Peaceful Assembly that provides guidance on the scope of the right to peaceful assembly, state obligations, restrictions, notification and authorization, law enforcement agencies’ duties and powers, and assembly during states of emergency and armed conflict.

OSCE Guidelines on Freedom of Assembly

Starting in 2007, the regional Organization for Security and Co-operation in Europe (OSCE) produced guidelines to assist members in aligning their legislation with agreed European and international standards on freedom of assembly. This effort aims to provide countries with different models to regulate the right to free assembly. In particular, the guidelines address: