Transparency and Accountability at the Frontlines of Justice: Access to Civil or Criminal Legal Aid 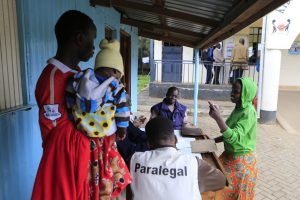 Access to justice is more than just access to lawyers or courts. It is a component of the rule of law, which at its core allows that individuals and communities with legal needs know where to go for help, can obtain the help they need, and can move through a system that offers procedural, substantive, and expeditious justice. While a person might resolve their legal needs without a clear understanding of the law and legal institutions, it is far better to empower individuals and communities to participate actively in resolving their legal problems, including instances of collective injustices or structural inequalities.

Legal aid is a critical component to ensuring access to justice. Indeed, it is a human right in the criminal context and a component of the fundamental right to a fair trial as recognized in the International Covenant on Civil and Political Rights. Whether in the criminal or civil justice system, legal aid for individuals with limited means or who are in vulnerable situations is critical to achieving fair and just outcomes. Legal aid can ensure that justice systems are accountable and safeguard the rights of individuals.

Indonesia Improves the Availability and Quality of Legal Aid

The Indonesian Legal Aid Foundation (ILAF) has been providing legal aid in Jakarta since the 1970s. Their services increased dramatically in the 1980s with assisting clients who were not only poor, but also marginalized and oppressed. The ILAF’s services include litigation, education and empowerment of community members, research, and policy advocacy. In recent years, ILAF has received support from the Open Society Foundations to enhance its provision of legal aid. In 2018, Indonesia committed to creating regulations that guarantee funding for legal aid organizations, allowing them to expand their reach to more remote and impoverished communities while simultaneously strengthening the awareness and legal capacity of individuals who are poor and marginalized.

Diversifying Funding for Legal Aid in the U.S.

In December 2012, the United Nations General Assembly adopted 14 principles and 18 guidelines to guide countries on the components of strong legal aid programs in the criminal justice context. While the Principles and Guidelines recognize that, “states employ different models for the provision of legal aid,” they can be effective tools in strengthening and growing existing criminal legal aid systems throughout the world. Since their adoption, the UN Commission on Crime Prevention and Criminal Justice has encouraged governments to strengthen the provision of criminal legal aid. The 14 principles include:

The 18 guidelines provide more detail on these principles such as how legal aid should be provided and how countries can establish, fund, staff, and regulate legal aid schemes, including partnering with non-state legal aid providers.