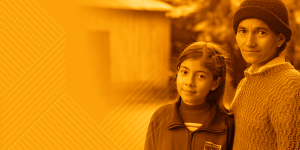 On November 25, 1960, the bodies of three sisters, Patria, Minerva, and María Teresa Mirabal Reyes were found at the bottom of a cliff in the Dominican Republic. Murdered for their outspoken advocacy, the sisters and their driver had been clubbed to death and placed in a jeep that was pushed over a steep edge.

The three sisters along with a fourth sibling Dede were known as Las Mariposas or The Butterflies. To Dominicans, they would become vivid symbols of a feminist resistance against the abusive dictatorship of Rafael Trujillo (El Jefe), providing hope and ultimately seen as a driving force in his overthrow.

In 1980, inspired by their story, the day of the Mirabal sisters’ death became the International Day for the Elimination of Violence Against Women in Latin America. In 1999, the United Nations expanded the day to include all women around the world..

This year, for the first time, the Open Government Partnership (OGP) is proud to join the effort.  Offering our support for 16 days of activism along with UN Women, the UNiTE campaign and hundreds of other organizations advocating to end violence against women.

OGP especially supports the call for all voices to be heard through #HearMeToo. It is the stories of individual courage and heroism such as those displayed by the Mirabal sisters which can educate, inspire and lead to inclusive solutions. But, lifting your voice for just causes should never come at the cost of violence or intimidation.

Governments have a critical role to play in preventing and addressing sexual and gender-based attacks, supporting survivors, and ensuring female political candidates and civic leaders can fulfill their public duties without the threat of violence.

This is where OGP can help. OGP offers an advocacy and action platform where women and gender advocates can get an equal seat at the table to work with government reformers to advance gender equality through concrete actions. The OGP process is already being used to combat gender-based violence, support survivors, and ensure justice.  There is still much to learn, but there are encouraging signs.

In Sierra Leone, civil society, government and the police have committed to publishing data on sexual violence against women and girls, establishing a forensic lab with trained and qualified personnel, developing a directory for all sexual violence convicts, and, with the Ministry of Health, providing free health services for women affected by sexual violence in collaboration.

In Sri Lanka, the government is using the OGP process to implement provisions of the Convention of Eliminating All Forms of Discrimination Against Women (CEDAW), which includes direct provisions on preventing and addressing gender-based violence.

As part of its OGP process, Costa Rica consulted with indigenous communities that have been left out of decisions impacting their lives for more than 20 years. Nancy Marin Espinoza, Deputy Minister for Citizen Dialogue and Political Affairs noted the significance of a more inclusive process, “There are issues of discrimination and machismo that affect all ethnic groups in the country.  I think it is very important to empower these women because there are so few that come this far or dare to speak out in their communities.”

In places like Costa Rica, Colombia and Ireland, the OGP process is used to help protect the rights and safety of LGBTQ citizens, who face the some of the harshest forms of systematic exclusion and targeted violence.

The actions of these countries are just the beginning.  OGP is launching a new initiative, Feminist Open Government, to foster more gender-based commitments and to learn how strong advocacy efforts like the 16 days can help support reform at the country and local level, such as passing new legislations, enforcing existing laws, fulfilling requirements under CEDAW or implementing the Sustainable Development Goals.

Through 16 days of activism, #HearMeToo new voices will be raised and real stories of real people will give life to statistics, illustrating the destructive impact of gender-based violence on families, communities and countries.

That is the inspiring lesson of the Mirabal sisters. Movements rooted in individual leadership and connected by shared values and partnership can be powerful agents for change.

Thank you for the information. It is really helpful to understand the history of ’16 Days of Activism Against Gender-Based Violence’.
Thank you again.