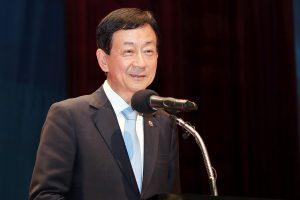 The Gwanghwamoon 1st Street movement reminded us of the power of the citizenship and the critical role of citizens – especially underrepresented groups – in shaping governments and policies that better reflect their needs. Why is it important for governments to sit down with citizens and civil society organizations to co-create reforms?

The Government of the Republic of Korea has transformed Gwanghwamun Square to a place called Gwanghwamoon 1st Street where citizens voice themselves and the government listens to them. Citizens of all ages, from children to the elderly, participated in the policy-making process as members of a transition office for a new government. For 49 days after the new government took office, more than 180,000 proposals were collected and demonstrated how much citizens have yearned for an open government. Among all, 99 proposals have been selected as key projects for the Moon administration and implemented since then.

Recognizing the importance of citizens’ critical role in shaping policies, Korea has pursued government innovation in a holistic approach to reflect voices of citizens. With participation and cooperation as one of three key pillars of the government innovation strategy, the Korean government ensures that citizens are able to participate in policy-making processes, including budgeting and legislation. In order to make citizen participation sustainable, the temporally-run platform is now open as an online-and-offline open communication forum.

The reason why governments need to work in partnership with citizens and civil society organizations is two-fold. First, it is challenging for governments to solve problems alone. Collective intelligence and capabilities are indispensable to address challenges such as low birth rate, a rapidly aging society and air pollution. It is also the citizens who can take the lead and make positive changes in our everyday lives. Second, governments need to make policies that citizens want. It is a government’s responsibility to listen to its citizens and make policies that benefit their lives. When considering where the government resources are invested and whether policies would make small yet meaningful societal changes, it is important to explore how citizens find it. All of the above becomes possible when we, the governments, are in partnership with citizens.

This month we’ve observed the International Day of the Girl, the International Day of Rural Women, World Food Day, and World Poverty Eradication Day, all issues that are called to be addressed through the Sustainable Development Goals. How can countries and local governments leverage platforms like OGP to implement SDGs like those related to justice (SDG16) and gender equality (SDG5)?

The Sustainable Development Goals (SDG) adopted by the UN in 2015 show international collective ambition to foster peaceful, just and inclusive societies. The 17 goals including that of justice (SDG16) and gender equality (SDG5) are aligned with open government values and principles and can also be bolstered by the joint vision of the lead OGP co-chairs, the Government of Argentina and Robin Hodess.

One of the ways OGP can be leveraged to implement the SDGs is the OGP action plan. Since 2011 at its launch, OGP member countries and local governments have designed and implemented nearly 4,000 open government commitments among which 89 commitments are dedicated to pursuing gender equality and 170 to justice. The biennial action plans have been – and will be – a set of concrete and deliverable commitments that respond to the needs of each country and can help us implement the Sustainable Development Goals.

Canada committed to conducting a Gender-Based Analysis Plus (GBA+) review to ensure that the needs of women are considered. In the case of Kenya, 30 percent of public procurement is set aside for women and people with disabilities. In Korea, a minimum ratio for female workers in leadership has been set to break the glass ceiling and government innovation is pursued to realize public values for communities that protect human rights and leave no one behind. Korea will make good use of action plans to make policymaking processes inclusive for diverse stakeholders.

What area would you like members of the Partnership to focus on more? What can we do to strengthen the open government work members of the community are doing in the future?

For the last eight years, OGP has grown to not only a platform that promotes transparency, empowers citizens, and fights corruption but also a leader that supports governments to expand civic space, renew citizen trust, and deepen democracy with the help of digital technologies. It all shows that the work of OGP is critical.

Representing the OGP as incoming Co-Chair, the Government of Korea will prioritize activities to “promote participatory democracy at all levels, pursue public values towards an inclusive state and renew trust through government innovation.” Furthermore, Korea will develop a joint vision with incoming civil society Co-Chair María Baron from Directorio Legislativo, with a focus on renewing trust through open government values, promoting inclusion and responsiveness across all public institutions and levels of government and strengthening the Partnership. Furthermore, the year 2021 marks the 10th anniversary of  OGP and will be a moment to look back at lessons learnt and look forward to how OGP can continue to be at the forefront of open government.

As Co-Chair, Korea will take efforts to help OGP grow as an accountability platform that mobilizes high-level political leadership and strengthens co-creation between governments and civil society.