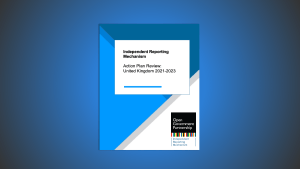 As a co-founder of OGP, the United Kingdom has been a global leader on open government and anti-corruption efforts, implementing four open government action plans to date. However, the Independent Reporting Mechanism (IRM)The Independent Reporting Mechanism (IRM) is OGP’s accountability arm and the main means of tracking progress in participating countries. The IRM provides independent, evidence-based, and objective ... has completed its review of the UK’s most recent action planAction plans are at the core of a government’s participation in OGP. They are the product of a co-creation process in which government and civil society jointly develop commitments to open governmen..., finding that it has failed to meet minimum standards that are required when developing an OGP action plan.

The IRM report, which ​​provides an independent technical review of the action plan found that there was one promising commitmentThrough the Action Plan Review, OGP’s Independent Reporting Mechanism (IRM) recognizes promising commitments that address a policy area that is important to stakeholders or the national context. Pro... and that several new topics were addressed. But, the IRM found that the government did not provide its reasoning behind why certain priorities, ideas or activities proposed by non-government stakeholders were or were not included in the UK’s 2021-23 OGP Action Plan, or how the public’s feedback was used to shape the plan before it was finalized in late 2021.

This is the third consecutive action plan cycle in which the UK fails to meet the minimum requirementsAll OGP participating countries are expected to adhere to the Participation and Co-Creation Standards. Each Standard includes clear and measurable minimum requirements that all OGP participating count.... The UK was placed under Procedural ReviewAccording to OGP’s Articles of Governance, OGP participating countries are expected to consistently and continually advance open government for the well-being of their citizens. This includes develo... in February 2021 due to acting contrary to process for two consecutive action plan cycles (late delivery of its 2018-2020 action plan, and not meeting the minimum standards during co-creation of its 2019-21 action plan).The Criteria & Standards (C&S) Subcommittee will discuss the findings of this report and review the UK’s participation status in OGP when it meets in mid-October.

The UK’s fifth action plan builds on previous efforts in open contractingA transparent procurement process, known as open contracting, increases competition, improves public service delivery, and ensures governments better value for their money. Technical specifications: C..., health sector transparencyAccording to OGP’s Articles of Governance, transparency occurs when “government-held information (including on activities and decisions) is open, comprehensive, timely, freely available to the pub... More, and international illicit finance, while also pursuing new areas of open justiceAn open, independent, and impartial justice system serves as a foundation for better access to justice by fulfilling all people’s civil liberties and allowing individuals to more effectively protect... and algorithmic transparency and accountability. The co-creation processCollaboration between government, civil society and other stakeholders (e.g., citizens, academics, private sector) is at the heart of the OGP process. Participating governments must ensure that a dive... kicked off at a stakeholder meeting in December 2020. Government and civil society participants agreed to explore nine themes as potential commitments and working groups were formed around each theme. The theme of anti-corruption and international illicit finance (CommitmentOGP commitments are promises for reform co-created by governments and civil society and submitted as part of an action plan. Commitments typically include a description of the problem, concrete action... 5) did not have a working group. Instead, the Cabinet Office drew upon ongoing work from the UK’s chairmanship of the G7.

The level of engagement in the working groups varied by theme, but the Government Point of Contact (PoC) noted that engagement was stronger than under the previous action plan. Membership of, and discussions in, the working groups were kept flexible. This approach produced mixed results. For some themes, stakeholders had clear expectations from past commitments that allowed them to quickly reach a consensus on deliverables (i.e., open contracting). For new themes, discussions were less focused due to lack of past experience in OGP processes (i.e., open justiceTo address barriers that prevent citizens from having their justice needs met, OGP participating governments are working to expand transparency, accountability, and inclusion into all systems of justi...). Some themes were excluded because the working groups could not agree on a set of draft activities that the Cabinet Office considered workable (i.e., natural resourcesOGP participating governments are improving transparency and citizen participation in natural resource governance to help detect corruption, safeguard community interests, and support environmental su.../climate change and standards and public life). The PoC noted that it was challenging in some working groups to achieve a balance between having a diversity of views and the necessary expertise in the topics. Meanwhile, both civil society and the PoC felt that not having the right people at the discussions, either in terms of thematic expertise or decision-making authority, made co-creation more difficult. Nonetheless, both the PoC and the UK Open Government Network (OGN) chair acknowledged that their counterpart remained dedicated to the process, despite external constraints (there were several ministerial turnovers at the Cabinet Office during the co-creation period) and limited resources (the OGN chair and other civil society stakeholders had volunteered their time to organize civil society participation).

The draft commitments were sent for ministerial approval in late 2021, before their adoption and submission to OGP. At this stage, many commitments had activities removed or significantly reduced in ambitionAccording to OGP’s Articles of Governance, OGP commitments should “stretch government practice beyond its current baseline with respect to key areas of open government.” Ambition captures the po..., without further explanation or consultation with non-government stakeholders. For example, the commitment on international illicit finance saw the removal of a key activity around the Economic Crime Bill, while the commitment on algorithmic transparency and accountability was reduced to “gauging the feasibility” of mapping existing appeal mechanisms. Civil society contacted by the IRM confirmed that they were not informed by the government about why these changes were made or how the final decisions for the commitments were arrived at. Consequently, the IRM assessed that the government did not provide a reasoned responseOngoing dialogue between stakeholders during the development of an OGP action plan is critical to the plan’s success. Specifically, communicating back to stakeholders the ideas received and decision... on how the public’s feedback was used to shape the action plan. After the publication of the action plan, the OGN put out a statement criticizing the last-minute changes and what they saw as a failure of the government to engage civil society on key areas of reform.

Before the end of August, the IRM report recommends using the opportunity afforded to OGP members to amend their action plans. The UK government and the OGN could work together to revive the working groups (with targeted civil society participation), to agree on amendments to the existing commitments that were removed or altered and revisit the themes that were not covered in the action plan (such as freedom of information, natural resources/climate change, and standards in public life). It may also be beneficial to formalize the multi-stakeholder forumRegular dialogue between government and civil society is a core element of OGP participation. It builds trust, promotes joint problem-solving, and empowers civil society to influence the design, imple... to bring more stability and consistency to the discussions.

The full Action Plan Review can be accessed here.

The UK was placed under Procedural Review in February 2021 due to acting contrary to process for two consecutive action plan cycles (late delivery of its 2018-2020 action plan, and not meeting the minimum standards during co-creation of its 2019-21 action plan). Procedural Review ​​involves enhanced support by the Support UnitThe OGP Support Unit is a small, permanent group of staff that work closely with the Steering Committee and the Independent Reporting Mechanism to advance the goals of the Open Government Partnership.... and Steering CommitteeThe Steering Committee is OGP’s executive decision-making body. Its role is to develop, promote and safeguard OGP’s values, principles and interests; establish OGP’s core ideas, policies, and ru... to help address the issues that have led to the review.

On June 28, 2022, the OGP Steering Committee approved changes to the Procedural Review protocols to align with the new Participation & Co-Creation Standards and timelines, as well as the new IRM reports resulting from the IRM Refresh. In line with the Procedural Review protocols, if a country acts contrary to process on numerous occasions and in different ways, the C&S Subcommittee may, in consultation with the Support Unit, recommend that the country be designated as “inactive” in OGP.  The C&S Subcommittee will only recommend inactivity automatically when a country fails to deliver an action plan for three consecutive years.

The UK currently remains under Procedural Review. This review can be concluded by meeting the minimum requirements during implementation of the 2021-23 action plan, as assessed by the IRM in the action plan’s Results Report, to be published within four months after completing its implementation. The C&S Subcommittee will review and discuss the UK’s participation status in OGP when it meets in October 2022.

The United Kingdom has been a global leader on open government and anti-corruption efforts. Since co-founding the Open Government Partnership (OGP) in 2011 and hosting the 2016 Anti-Corruption Summit...