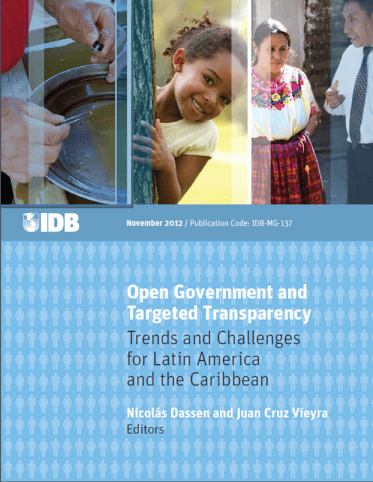 The Interamerican Development Bank shares the view that the concept of open government is a platform for rethinking public management and the way governments engage with civil society. Open Government Partnership (OGP) is not just another transparency initiative, but rather an opportunity to recast the traditional agenda on this field. By moving toward a pro-integrity and pro-citizen strategy, we think that the promotion of transparency and accountability policies are useful tools to strengthen and modernize public management in order to improve the quality and efficiency of public services. At the same time OGP empowers citizens to exercise social accountability more effectively.

How does the IDB implement this strategy? Through a two-fold approach: first, by supporting the implementation of open government policies. Countries are increasingly developing their government plans around this concept of openness for the modernization of their management systems. Second, Countries are developing targeted transparency policies in different social and economic sectors. This concept refers to the provision of specific and useful information for a targeted group of current and potential users, in a timely and friendly manner. This way, targeted transparency empower citizens to take better informed choices on public services they are entitled to, and enable them to more effectively advocate for and influence public policies decision-making processes and  exercise monitoring activities.

The IDB, through the Transparency Trust Fund, is pro-actively engaging with 11 countries in applying Targeted Transparency in key sectors such extractive industries in Ecuador and Housing in Colombia. The IDB is also contributing to help several countries enhance their capacity for consolidating and implementing their OGP action plans, and the implementation of specific commitments. In Colombia, the IDB is assisting with the establishment of a road map for the compliance of the action plan. In Peru the Bank is contributing to increase the information published in transparency portals of public agencies, regions and municipalities, implementing an open data portal, and drafting a diagnostic and a course of action to improve the public archives policy. The IDB is also committed with knowledge dissemination and regional policy dialogue. It has  recently co-sponsored a Regional OGP Conference (Chile, January 2013); and published a study on Open Government and Targeted Transparency (see chapter 2, by Alvaro Ramirez Alujas and Nicolás Dassen). This study showed that approximately 73% of the 243 OGP’s commitments submitted by the Latin American and Caribbean countries member are related to improving public services (27%, mostly e-government), and to the enhancement of public integrity (46%, mostly open data portals and implementation of access to information policies). These figures, we believe, show an incipient but positive trend in Latin American and Caribbean countries shifting from the traditional transparency approach towards one that considers openness and accountability as embedded principles of efficiency and effectiveness in public management and service delivery, embracing a more ambitious state modernization.