Stepping Up to Protect Civic Space and Democracy 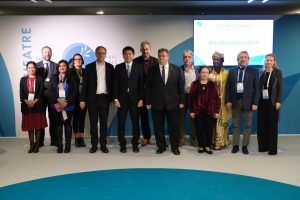 This article was originally posted on the Paris Peace Forum’s Medium page here.

Multilateral cooperation – especially on securing peaceful, just and inclusive societies – is hardly in vogue right now. We are in an era of trade wars, populist nationalism, and attacks on civil liberties. Landmark international agreements have been undermined, and political leadership defending liberal democratic values has waned at the highest levels in most countries. At the same time citizen protests in recent months, from Hong Kong to Chile, have been demanding more open, responsive and accountable governance.

The situation urgently requires a collective response from people who think open democracy can deliver results for citizens in ways autocracies cannot. It is not enough to bemoan the problem of democratic backsliding. A stronger coalition of governments, civil society organizations, and leaders needs to push back.

In that context the second edition of the Paris Peace Forum (PPF) last week offered a space for people working at the grassroots countering some of these global trends to showcase their work on a range of governance challenges, and to mingle with Heads of State. The Forum was launched by President Macron in 2018 to complement the events marking the 100th anniversary of the end of World War I with a forward looking agenda of solutions and action. The idea is to bring together Heads of State, several of whom from the 2019 attendance list do not stand for peace and democracy, with civil society to spark unusual alliances and cooperation.

Despite the gloominess of the past several years, these grassroots advocates offer glimpses of what an alternative might look like. Within the Open Government Partnership (OGP) we have a similar community. Whether it be the efforts to end the scourge of anonymous companies that facilitate money laundering, illicit money in politics, and corruption. Or the reformers working on opening up public contracting across the value chain so that people can track where public money is going, and how it delivers value to citizens. Or the community of activists who are trying to inject transparency and accountability into how governments use algorithmic decision-making, so it does not perpetuate bias. The challenge is to find these ideas and projects that can show why democracy works for citizens, and then support their growth within and beyond their countries. At OGP we have joined two important new initiatives that we hope will help advance this approach to democractic change.

First, we will serve on the advisory board of a new OECD observatory on civic space. The idea behind the observatory is to allow governments to share how they are promoting and opening civic space, and for governments to undergo “civic space scans” where they will receive concrete recommendations to tackle challenges.

Civic space is a priority issue for OGP. Since OGP was founded, the majority of our members have experienced declines in civil liberties even though we have eligibility criteria for entry which means the worst offenders cannot join. In OGP countries, data from 2017 showed that 58 percent of countries report issues related to harassment of activists and journalists. In nearly half of OGP countries, civil society organizations lack of access to funding and face barriers through tax regulations. In 52 percent of OGP countries, there are reports of excessive use of police during public protests, as well as the use of surveillance and personal data to target organizations, journalists, and human rights defenders. In 45 percent of OGP countries, there are problems with censorship or online discrimination. The new observatory’s contribution to tackling these challenges is to try and foster leadership from governments on civic space, to complement the excellent work civil society has done in drawing attention to the issue.

Second, OGP is a founding member of the International Forum on Information and Democracy. Convened by Reporters Without Borders, the Forum aims to further develop norms and standards to uphold democratic safeguards on information. Digital tools offer huge potential for enhancing citizen engagement and improving public services, but too often the rules governing our use of new technologies are set in tech epicenters like Silicon Valley or Beijing. Our challenge is to democratise governance of these digital tools or new technologies, whether it be working to promote transparent and accountable use of algorithms by the state (like France and Canada are doing through their OGP action plans), or with privacy activists to ensure data rights are developed and enforced. The principles of open government offer huge value when addressing the frontiers of digital governance, and we look forward to advancing these together with governments and civil society through this new Forum.

In order to build peaceful and just societies, we must build cross-sector coalitions to open up government and enhance democracy beyond the ballot box. This can only be achieved if we ensure a safe space for civil society, journalists, and everyday citizens to voice their needs and hold their governments to account.