The future of the Paris Agreement remains unclear. President Donald Trump promised to announce a “big decision” on the accord within the next two weeks. Journalists report that his advisors are fiercely divided on the issue, arguing either to withdraw entirely or to weaken the United States’ climate commitments. Such uncertainty from a key signatory and the world’s second-largest greenhouse gas emitter could undermine recent progress on climate action.

Now more than ever before, countries need to trust one another. To inspire greater ambition in low-carbon investments, adaptation finance, capacity building and transparency in national climate plans, government decision-makers need to see that their counterparts are making real progress. Open climate data—such as national datasets on emissions sources and mitigation, climate finance mobilization and use, and climate policy implementation—can help establish collective trust. If made easily accessible to the public, this information could also strengthen civil society’s capacity to track their governments’ progress, and if officials are responsive to public pressure, hold them to account.

But what specific data do stakeholders need? How can we make datasets more accessible to transform information into action? Here are two concrete examples of how the Open Government Partnership (OGP) can help countries answer these questions and close critical gaps in open climate data.

Much progress has been made on open climate data. As countries disclose more relevant datasets, civil society organizations have developed visualization tools that allow stakeholders to compare countries’ progress. The New Climate Institute’s Climate Policy Database, for instance, enables users to see which types of climate-relevant policies countries have implemented by sector, intended impact and policy type. It reveals not only where policies do not exist, but it also shows where data on implementation is unavailable. Reporting on the greenhouse gas impacts of climate policies—even when it does happen—is often inconsistent, or does not follow good practice standards. OGP members can address this gap through climate data commitments in their National Action Plans (NAPs). 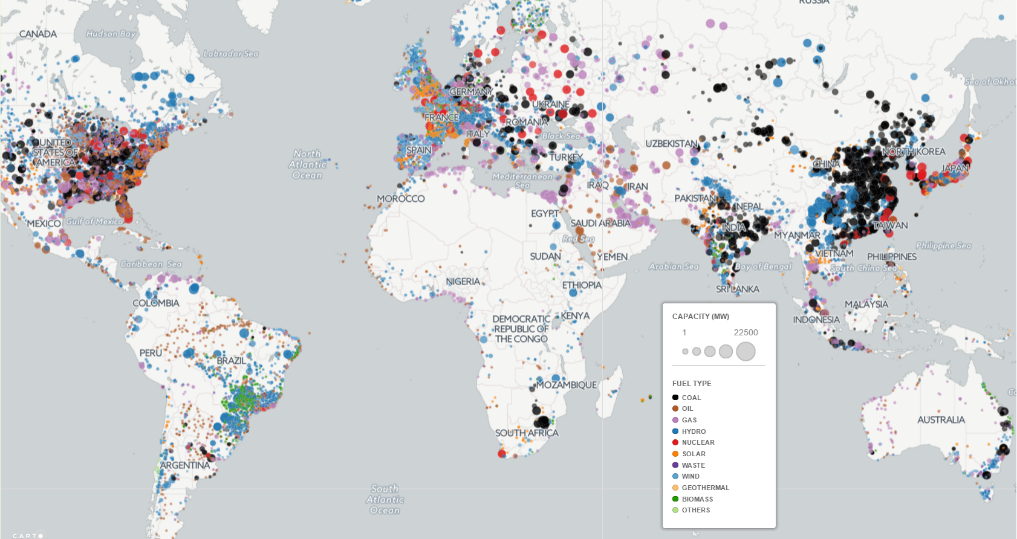 Power sector emissions account for over 40% of global greenhouse gas emissions – the single largest sector to contribute to climate change. While many governments publish economy-wide data, much more detailed information on a plant-by-plant level is needed to allow decision-makers to take impacts on climate, water, air pollution, and electricity access into account. For instance, information on power plant capacity, generation, emissions, water usage and particulate matter emissions are either unavailable or inconsistent. World Resources Institute’s and Google’s Power Watch pilot project shows that, while over 85% of global capacity is reported in some way, there is no consistency in methodology, format, quality and coverage. Such discrepancies make it difficult to identify climate risks and electricity supply.

Once published, the data can benefit a wide range of actors. Investors can better incorporate water risks and emissions into their investment decisions. Environmentally-minded companies can use the information to improve their emissions accounting, and energy corporations can identify new business opportunities. At the same time, this level of sectoral data also enables energy planners to adapt their models to the context of developing countries, and in some instance, it allows nations to conduct their own modeling. The public can also rely on this evidence to understand local impacts and demand participation in decision making processes.

Using OGP to Close the Gap

The usefulness of the online visualization and tools depends on the public availability of climate data that can be accessed, used, and verified. However, providing this technical information in open data formats may not be enough to enable civil society and stakeholders to meaningfully participate in energy planning and implementation. As is the case with open data generally, the pathway from disclosure to accountable climate action will require technically proficient intermediaries to make data more accessible to a broader audience, capable actors to use it to advocate for change, and responsive public authorities or effective accountability mechanism.

Given that climate change will exacerbate threats to poverty, public health, and security, the demand for climate relevant data may come from varied sources. Through the national consultation process, OGP members can support their climate focal points in identifying national or subnational datasets that should be prioritized for release in open formats. OGP members have demonstrated commitment towards using open data to address climate and sustainable development. OGP’s deep reservoir of open data implementation experience provide knowledge and guidance for countries that are expanding their efforts to collect, format, or share climate-relevant data more effectively.

In OGP, a small but growing number of countries are prioritizing climate data commitments in their NAPs. Of the seven OGP nations that made climate commitments in their 2016 NAPs, five of them (Mexico, Kenya, Honduras, Sierra Leone, and Tunisia) focused on collecting and disclosing climate-relevant data to the public.

Proponents of the Paris Agreement are the first to say that it was a starting point, and that greater ambition in the short and long term will be required. Building ambition will require a transparent understanding of the progress countries have made as well as continued pressure and support from domestic and international advocates. Open data is not a panacea, but it is a critical part of the solution to enable transparent monitoring, public engagement, and accountability in meeting climate goals. OGP members should ensure that their national climate focal points are engaged in the creation and implementation of open data commitments to help meet national climate goals.