Open Government in Greece: Participate, Propose and Be Heard!

The involvement and collaboration of governmental bodies, citizens and other stakeholders in order to promote open data and open government initiatives have been one of the achievements of the event “Open Government: Participate, Propose and Be Heard! Conformation of the Third National Action Plan 2016-2018.”

While conducting the third version of Open Government Strategy Plan, the Greek Government has initiated a bottom up process, so that the new version is not only commented by different stakeholders but actually co-developed and co-created by the citizens. This procedure has been a major change compared to the way the two previous plans have been formed. A number of “closed” meetings with stakeholders have taken place in Athens. Following that,  OK Greece proposed to organize an open event in order to get feedback from the citizens. The event has been co-organized by the Ministry of Interior and Administrative Reconstruction, Aristotle University and Open Knowledge Greece on the 30th of May.

In the first part of the event, the speakers discussed aspects of open government at national and local level. The representatives of the government and the local administrations underlined the importance of fiscal and administrative transparency and the participation of the citizens in the decision making process.

Open budgets and participatory budgets are among the main goals of the regional administration of Western Macedonia and the municipality of Thessaloniki. OK Greece presented the Horizon 2020 project, openbudgets.eu and OpenSpending, as an important ecosystem that can be used to achieve such commitments.

The second part of the event has been a workshop organized by OK Greece in order to encourage people to participate in the process of deliberation and get involved in the initiative of open government. The workshop has been very successful and productive as more than 32 proposals on open government were stated, based on the three issue areas of integrity and accountability, access to information and authorization to the citizens. Moreover, it was an opportunity for the administrative sector to talk and listen to citizens and other stakeholders on the matter of a transparent society.

The participants evaluated the proposals in an online form and the most important ones have been included as part of the final document with the proposals from OK Greece that has been submitted to the Ministry. The submitted document will be further evaluated in order to be incorporated in the Greek third national action plan to the Open Government Partnership.

Among the most important ones are open access to contracts of public procurement, transferring data of tender notices automatically via prototyping and the possibility to control the laws. The proposals also included the publication of specific datasets in the areas of health, education, environment, justice and agriculture that could be used either by journalists to find interesting stories for the public or by businesses for new investments where there is a need. 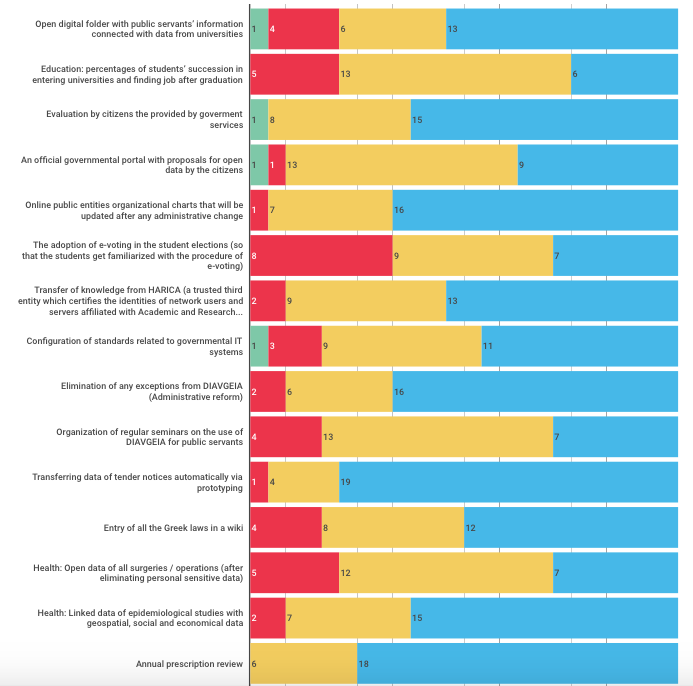 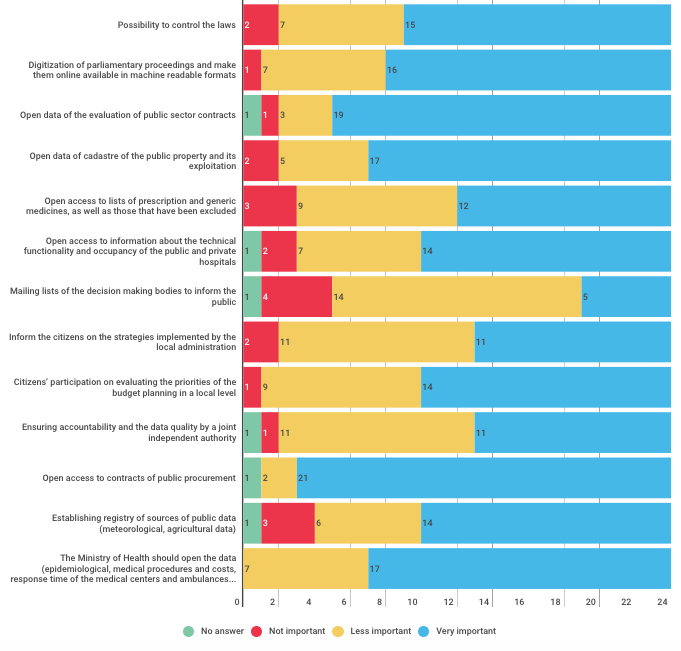 However, the main issues that have been introduced by OK Greece and should be part of the Action Plan are: the education of the employees in the public sector on open data (School of Data), so that they can contribute and participate in the procedure of open government; the clear distinction between open data (right license and format) and DIAVGEIA; the openness of more data, creation of open data census and open data index by the cities, regions and ministries; as well as the reinforcement of citizens’ participation in the governmental procedures.

The event was quite successful not only because of  the total number of participants but also because of  the diversity of the stakeholders that participated in it. For example from the Aristotle University of Thessaloniki more than ten different academic departments,  and governing offices,  participated, as well as the department of Mathematics and the department of Journalism. Different organizations representing the open society initiatives and the University of Macedonia in Thessaloniki; two municipalities from the greater area of Thessaloniki and two regional authorities from Macedonia and a number of self employed engineers, consultants and private companies. The different entities that were present at the event represented successfully the vast majority of the society .

The consultation was organized in a sub-regional level because in that way more things can be achieved for transparency initiatives. The region, as it is smaller, can take specific actions towards openness and the citizens themselves can participate directly to the administrative procedures. Thus it is important to focus on initiatives destined for the local administrations that would lead to changes in a governmental level.