The report takes deep dives into selected policy areas. For this first global report, the selected themes are: (i) civic space, which constitutes a vital priority for OGP countries amid the backsliding noted above; (ii) anti-corruption, where open contracting and beneficial ownership transparency are emerging areas in which OGP countries can advance from innovation to norms (as has been the case regarding access to information, asset disclosure, and open budgeting); and (iii) public service delivery, especially, education, water and sanitation, and health, which can deliver tangible impacts in the lives of citizens, but also constitute emerging areas to continue to be nurtured and deepened.

Civic Space: Erosion at the foundations of Open Government

Civic space is the fundamental underpinning for open government and OGP. Yet, as the report documents, civil liberties (the core of civic space) continue to experience a steady erosion, even in OGP countries. A 2018 OGP report found that nearly half of OGP countries had problems in each of the basic freedoms of assembly, association, and expression, as well as the fundamental rights that make transparency, participation, and accountability work. At the same time, very few of those countries were using their OGP action plans to address these issues.

The report focuses specifically on two emerging areas for tackling grand corruption and improving government efficiency: open contracting and beneficial ownership transparency. OGP members were the earliest adoptees of beneficial ownership policies and open contracting standards, helping to begin an early wave of innovation. While these two practices are not yet global norms, they are reflected in a growing number of OGP action plans and promise transformative impact.

In analyzing reforms and interviewing reformers working in this area, there are a number of cross-cutting issues. First, implementers do better when they: involve users from the start, identify means by which people can register complaints or raise suspicious activity, improve data quality (including regularity and recency), and implement open data standards and ensure interoperability with other datasets.

Open government can improve people’s lives on a daily basis. To this important end, the report examines three key sectors: water and sanitation, health, and education, and uses available data to identify potential areas of work for future action plans. The areas examined include: availability of sufficiently disaggregated data for decision making, disclosure of decision-making plans and policies to the public, and priorities for participation and accountability, including inclusion of vulnerable or historically excluded groups. The report further looks at how citizen feedback can greatly improve public services, but also how a lack of data, which is practically useful for decisions, may hinder future progress.

When comparing progress of OGP members on these selected policy areas, it is compelling to look at the areas where OGP countries have made significant achievements relative to real-world conditions. As part of this report, OGP combined third-party data across five dimensions and twelve sub-dimensions (available in a public database at opengovpartnership.org/open-data). This allows for comparison of performance in OGP with “real-world” performance at the member level, and at the level of the action plan. Figure 1 below shows the strength of OGP commitments (according to the IRM) as well as performance overall for each policy area (according to third-party organizations). All scores are normalized from 0 to 4. Higher IRM-based scores indicate stronger commitments that were relevant, ambitious, significantly complete and/or showed major evidence of changes in openness. As a result, the figure highlights where there are strong performers (active on that issue in OGP or not active) and where countries are making notable efforts, even if the results are not yet clear. For underlying indicators and methods, please see the Methods section in Volume II of this report. 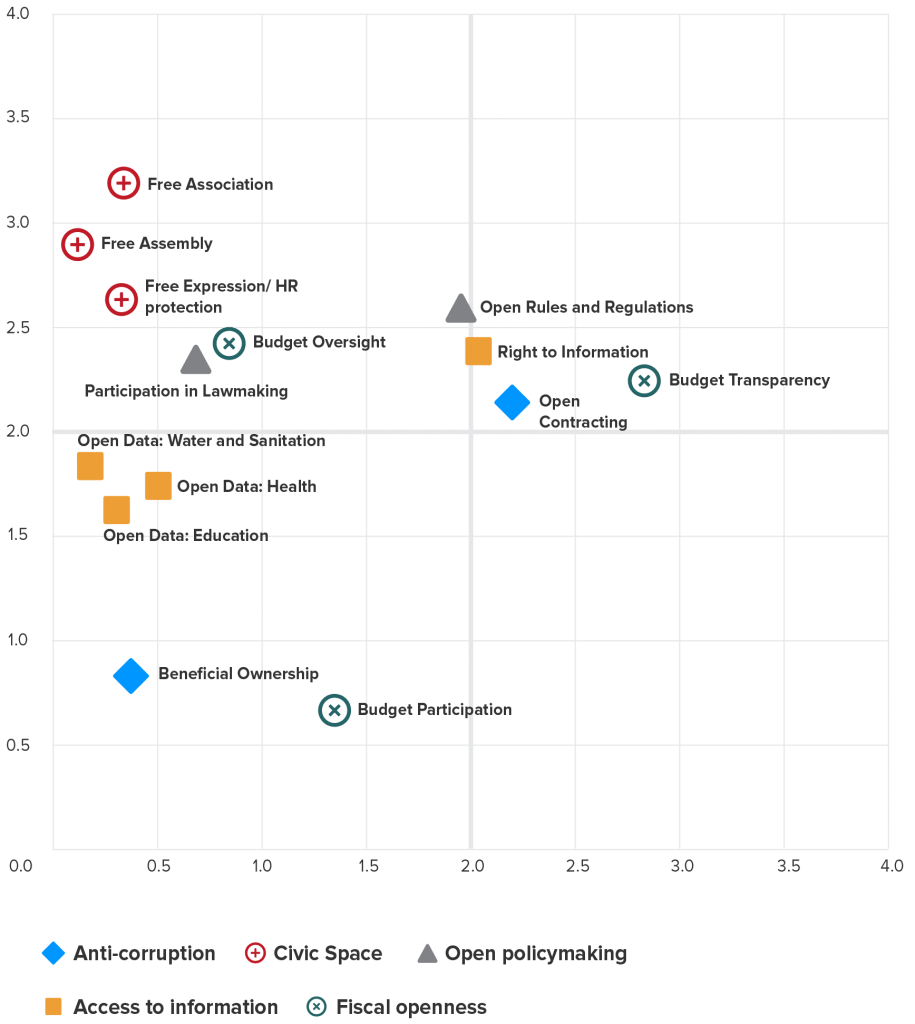 Figure 1.  A comparison of strength of OGP commitments with third-party performance indicators by policy area

As Figure 1 shows, the three focus areas of this first edition of the report have significant potential for growth, at least within OGP action plans. The anti-corruption initiatives, as featured within this report, are still new and have yet to see widespread adoption or changes in third-party indicators. Beneficial ownership, in particular, has yet to move from “innovations to norms.” While many elements of civic space are relatively safe within OGP countries, there remains much work to be done and it is not yet the norm that OGP action plans foster an enabling environment for civil society. Finally, the institutions and information for openness in basic public services remain underdeveloped in a large number of OGP countries.

Justice: From Advocacy to Concrete Commitments

Justice merits greater attention within OGP. While the number of justice commitments in action plans continues to grow, overall there are still too few. And although the commitments that have been put forward could improve government transparency, civic participation, and accountability, the IRM has determined that many have not been fully implemented.

The Justice Policy Series is a follow-on to the Open Government Partnership Global Report, issued in May 2019. The series’ first installment on Access to Justice was released in September 2019 and the second installment Open Justice was issued in December 2020. The third installment Justice as a Means to Enforce Open Government will be issued in 2021. The series aims to highlight the important synergies between justice and open government and the ways in which countries can use OGP to make accountable, credible improvements to their justice systems.

When citizens understand and help to shape the rules that govern society, regulations are more effective, business environments are stronger, and levels of corruption are lower. Since the founding of OGP, many members have made commitments to improve regulatory governance.  In general, OGP reforms have contributed to important results, particularly around civic participation. Nonetheless, more work is needed to engage citizens earlier in the rulemaking process, strengthen accountability mechanisms, and mainstream open regulatory practices across multiple levels of government, particularly in lower-income countries.

This paper looks at OGP reforms in four key areas of regulatory governance where open government and the World Bank’s Global Indicators of Regulatory Governance (GIRG) data align. These are: accessing laws and regulations, transparency of rulemaking, public consultations, and challenging regulations. The paper provides specific findings and recommendations for each of these four areas as well as reform examples and stories.