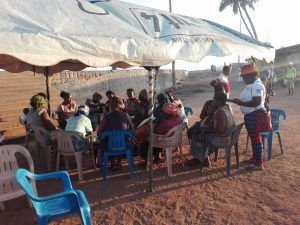 “Initiatives such as the Open Government Partnership open new and improved communication channels between government and citizens, and enable local government to have better information and be more accountable to the needs of their citizens,” declared Mayor Anthony K.K. Sam. . This statement set the tone for an exciting journey towards an inclusive and active co-creation process for the 2018-2020 Open Government Partnership (OGP) Action Plan for Ghana’s Sekondi Takoradi Metropolitan Assembly. As the team leader working on this exercise with Friends of the Nation, a civil society organization, I was thrilled by this level of political commitment.

Shepherding the co-creation process has been one of the most exciting experiences in my career. The numbers say it all: close to 1,200 people were directly engaged through community visits, training workshops, and brainstorming sessions. Another 10,000 people were indirectly reached through several radio programs. The diversity of stakeholders was significant, with members of civil society organizations, government, and the private sector, as well as community leaders, persons with disabilities , people living with HIV, fisher folk, farmers, traders and the media. The enthusiasm of participants, the level of community engagement and the active participation of local leadership gave me hope that there are promising new trends in local governance and service delivery in Ghana. 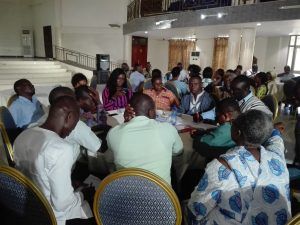 The city of Sekondi-Takoradi Metropolitan Assembly (STMA) is the third largest in Ghana and currently the hub of a young oil and gas industry. It joined the OGP in 2015 and implemented its F irst A ction P lan in 2016-2017. Upon receiving financial support from the OGP Multi Donor Trust Fund, in May 2018 Friends of the Nation began collaborating with other civil society partners (Berea Social Foundation and the STMA City-Wide Settlement Upgrading Fund) and STMA’s OGP Multi-S takeholder Forum (MSF). Together, we set an objective for the Second Action Plan co-creation process: to facilitate greater inclusion of citizens’ voices in creating an action plan that reflects their open government priorities and aligns with the development plans of the local government. The high-level commitment from the Mayor and other senior officials gave us the support and authorizing environment to proceed. In fact, senior level participation was sustained in every major activity from the start of the co-creation journey to community outreach sessions and until the launch of the plan .

Expectations for improving governance and service delivery were high as the process got underway . The journey towards meeting them began with the reconstitution of the MSF that guided the co-creation of the First Action Plan. It had forty members, of whom there were seventeen government representatives, fifteen representatives of civil society and the media, and eight representatives of the private sector.

An important step for improving the effectiveness of the MSF was the establishment of a nine -member Working Team . The Team was tasked with reviewing the previous action plan , setting out the initial goals for the 2018 co-creation process, undertaking key stakeholder mapping, developing a community engagement strategy and preparing a workplan. This approach helped us take stock and build on what had already been done. 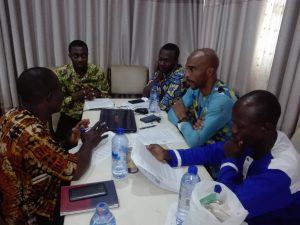 The Working Team, MSF, and I worked tirelessly to create opportunities for people’s voices to be included in the preparation of the Action Plan. This consisted of (i) stakeholder sensitization and consultation meetings in ten communities and with disability groups and people living with HIV; (ii) training on open government issues, including local government legislation, for over sixty people from the MSF and selected community champions; (iii) facilitation of brainstorming sessions to come up with draft commitments; and (iv) a presentation on the use of social accountability tools to improve local governance and public service delivery, which to me is crucial for tracking the implementation of the Action Plan. One resident from Essipon reflected , “We are excited about the opportunity to contribute to the OGP consultation process. We believe this is the beginning of a process where government communicates its activities to the people and also listens to what the people say.”

The power of the media was also used to extend our reach to more people. Five radio discussions, two TV news items, and four news articles helped      to raise public awareness of      the OGP principles and the co-creation process and to solicit inputs for the Action Plan.      The feedback from the public was encouraging. A caller to one of the radio programs said, “If this [is] how [the Local Government of] STMA plans to be more open and transparent, then these are exciting times. My small suggestion is for the Assembly to reduce the bureaucracy in acquiring development permits by using technology.”

While we were pleased to receive positive community responses, we knew that the success of the consultation process rested on the success of converting the ideas to actionable commitments in the Action Plan. Following an MSF brainstorming session and a validation workshop, the draft Action Plan was validated by the MSF and sixty other stakeholders.

As I collaborated closely with the Working Team in facilitating this inclusive process, I was touched by the passion and commitment of the MSF members, and the way the OGP process has transformed their perceptions of government.

Richard Adjololo is the CEO of Big RKNA Ventures, and participated as a representative of industrial players on the OGP. “OGP is a fantastic process and it has been an eye-opener,” declared Richard. “At the time I joined the concept was very new to me. And the question I asked myself was ‘Why haven’t we done this a long time ago? Development is for the people but how do you develop for the people when they don’t know what you are doing for them?’” He continued, “The OGP co-creation process makes absolute sense and it makes governance a truly two-way affair.” 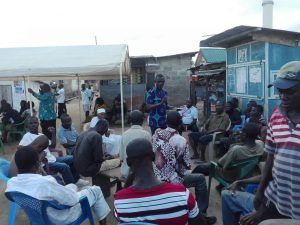 Echoing Richard’s sentiments was Mildred Siabi Mensah, Chief Reporter for the Ghana News Agency (GNA) in the Western Region, and a member of the MSF and the Working Team. According to Mildred, “The introduction of OGP has been very revealing. I have learnt a lot, particularly around the engagement between state actors and the citizenry. It is one of the key things we have to do in building upon our democratic credentials as the hope of democracy in Africa. Getting citizens engaged [eases] tensions in society. The people get to know what their monies are used for. They are better able to suggest and ultimately influence government policies.”

During a consultation with disability groups, a participant referred to open government as “the timely involvement of the ordinary citizens in the areas of budget, infrastructure, accountability on projects and right to information.” The five Open Government commitments in the finalized action plan, which was submitted in September 2018, reflect the promotion of transparency in public infrastructure; civic participation in planning and budgeting; access to information; better spatial development; and improved water and sanitation services. I am confident that the successful implementation of these commitments will positively affect the daily lives of the over 700,000 people in Sekondi-Takoradi. And I, along with the partners we have brought into the dialogue, will be there to monitor the progress.

[1] The Working Team was comprised of representatives from c     ivil s     ociety o     rganizations; the Presiding Member of the Local Government of Sekondi-Takoradi;      the OGP Point of Contact;      a community leader;      a representative of the private sector; a representative of vulnerable groups (Persons L     iving with Disabilities     ); and a journalist.

[2] The MSF and Working Team agreed on engaging ten      communities, compared to four during the previous co-creation process. The communities were carefully selected based on objective criteria from the three sub-metropolitan district councils based on population, diversity of social groupings, geographical location and the responsiveness of the community to the opportunity for citizen     -government engagement.  In addition to this, two consultations were carried out with persons living with disabilities      and people living with HIV.