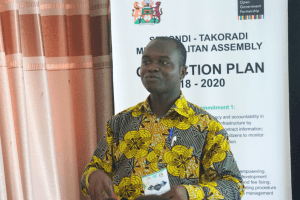 The Sekondi-Takoradi Metropolitan Assembly (STMA) joined OGP in 2016 to strengthen citizen participationAccording to OGP’s Articles of Governance, citizen participation occurs when “governments seek to mobilize citizens to engage in public debate, provide input, and make contributions that lead to m... More, fiscal transparencyAccording to OGP’s Articles of Governance, transparency occurs when “government-held information (including on activities and decisions) is open, comprehensive, timely, freely available to the pub... More, and accountability. As the city grows, the Assembly seeks lasting and innovative open government solutions to improve municipal services and infrastructure to aidMore and better information about aid helps partner countries and donor institutions plan and manage aid resources more effectively, parliaments and civil society to hold governments accountable for t... development. Isaac Aidoo is the OGP Government Point of Contact for Sekondi-Takoradi, Ghana.

How has the inclusionOGP participating governments are working to create governments that truly serve all people. This includes many historically oppressed groups such as persons with disabilities, women, lesbian, gay, bi... of citizens and civil society organizations impacted the co-creation processCollaboration between government, civil society and other stakeholders (e.g., citizens, academics, private sector) is at the heart of the OGP process. Participating governments must ensure that a dive... and how has that impact translated into reforms?

During the launch of the OGP co-creation process, the Mayor of Sekondi-Takoradi Anthony K.K Sam said the initiative “opens new and improved communication channels between government and citizens, enables local government to have the needed information and makes government more accountable to the needs of their citizens.”  And he was right. A more inclusive and active co-creation has delivered important reforms for citizens in STMA. Our civil society organization (CSOs) partners (Friends of the Nation, Berea Social Foundation and STMA City Wide Settlement Upgrading Fund) played a key role in ensuring that citizens, especially the marginalized groups, were included throughout the process. and these involvements provide a promising new trend of good governance and better service delivery for Sekondi-Takoradi, Ghana.

The numbers say it all: Close to 1,200 people were directly engaged through community visits, training workshops, and brainstorming sessions. Another 10,000 people were indirectly reached through several radio programs. The diversity of stakeholders was significant – from civil society organizations, government, private sectorGovernments are working to open private sector practices as well — including through beneficial ownership transparency, open contracting, and regulating environmental standards. Technical specificat..., community leaders, youthRecognizing that investing in youth means investing in a better future, OGP participating governments are creating meaningful opportunities for youth to participate in government processes. Technical ... groups, persons with disabilities, people living with HIV, fisher-folk, farmers, traders and the media. The enthusiasm of the stakeholders engaged made the exercise even more exciting and translated into a number of reforms including:

We have seen many innovative reforms on open government at the local level, including STMA360 which increases transparency in infrastructure in the area. Why should more local governments also apply the open government principles and push reforms like these?

Governments everywhere are facing a crisis of trust; citizens prefer not to participate in local level decision-making and action due to perceived corruption, government unresponsiveness and poor delivery of municipal services.

Government services that involve transactions are fraught with real and perceived cases of corruption, avenues to seek information are limited and bedeviled with bureaucracy, procurement of public infrastructure is shrouded in secrecy and fiscal reporting remains complex. This results in a  feeling of exclusion by citizens leading to a growing crisis of trust.

Open government tenets such as fiscal transparency, access to information, government integrity, citizen participation and the use of technology and innovation to remove opacity in governance is the surest way of enhancing civic spaces for citizens to hold decision-makers and duty bearers to account at all levels of government.

Through a multi-stakeholder approach that espouses the use of co-creation to reach desired outcomes, subnational governments are afforded a unique opportunity to understand their failings in carrying-out their mandate and embracing new approaches and reforms through commitments that can transform the status quo.

OGP promotes reforms that have the potential to improve the governance and performance of public services, and empower citizens, civil society and other groups to take collective action to achieve social outcomes.

Inclusive citizen engagement is a cornerstone in the delivery of better public services. Hearing from diverse perspectives can enable a deeper understanding of issues, surface more innovative ideas, and contribute to better decision-making and stronger democratic governance at the local level; this can only be achieved through the application of the OGP principles.

The provision of public services is a key component of the social contract between governments and citizens, and an area where open government reform is likely to have the most meaning and impact for citizens at the local level.

The OGP concept helps to promote inclusion in decision-making thereby building trust and confidence in government. Hearing from diverse perspectives at the local level is now leading to more innovative ideas, better decision-making and stronger public support of outcomes of interventions.

Planning and implementation is most effective when done in partnership with citizens.. As an OGP Point of Contact in the government, I can boldly say that the OGP concept and journey has reaped so many benefits and advocate for its application by local governments to help push and implement reforms that will improve people’s lives.

STMA became the first subnational government to join CoST international and we hope to enhance infrastructure transparency, one of our core commitments in the OGP action plan.

We  will also be the  first local government to publicize its Assurance Report before the end of January 2020. The CoST assurance process helps stakeholders understand the data disclosed on specific infrastructure projects in the disclosure process. The process is carried out by an independent assurance team who highlights the accuracy and completeness of data so that key issues can be put into the public domain and made easily accessible.

This  process will have a great impact on the delivery of public infrastructure in STMA and empower citizens to demand better infrastructure.

Using the CoST Multi-stakeholder and Social AccountabilityTransparency of public service delivery is not enough on its own; giving citizens opportunities to monitor progress on the ground and hold their governments accountable improves the quality of these s... approaches; the private sector, civil society organisations, media, and citizens will be equipped with information to engage the government to shape reforms, demand better services and value from public infrastructure investment and also hold decision makers to account.

Stakeholders are being equipped on CoST core features. It is envisaged that the four core features of CoST – Disclosure, Assurance, Multi-stakeholder working and Social accountability – will help to transform infrastructure delivery in Sekondi-Takoradi for better value and improve citizens lives. In this case, social accountability will play a key role in achieving this vision.

This is such an amazing stride and worth sharing in the OGP space. Citizen’s participation is crucial in achieving greater sense in governance.

Hello Isaac. Great work. I’m a Ghanaian masters student working on Open Government. May I please get your email address in order to ask you some follow up questions?
Hope to hear from you soon.
Thank you 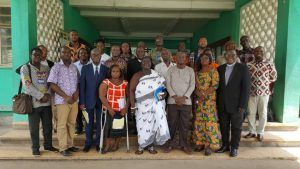