We are pleased to publish OGP’s 2015 annual report, authored by staff in the Support UnitThe OGP Support Unit is a small, permanent group of staff that work closely with the Steering Committee and the Independent Reporting Mechanism to advance the goals of the Open Government Partnership.... and Independent Reporting Mechanism. The report serves to capture a year of activities, and shine a spotlight on some of the most interesting examples of how OGP is being used in different countries. There are of course hundreds of open government reforms happening which we weren’t able to capture in this report, but we hope to do so in other publications during 2016. Thank you to everyone who supported the work of OGP in 2015. We look forward to working with our partners around the world to further open up government to citizens in 2016. 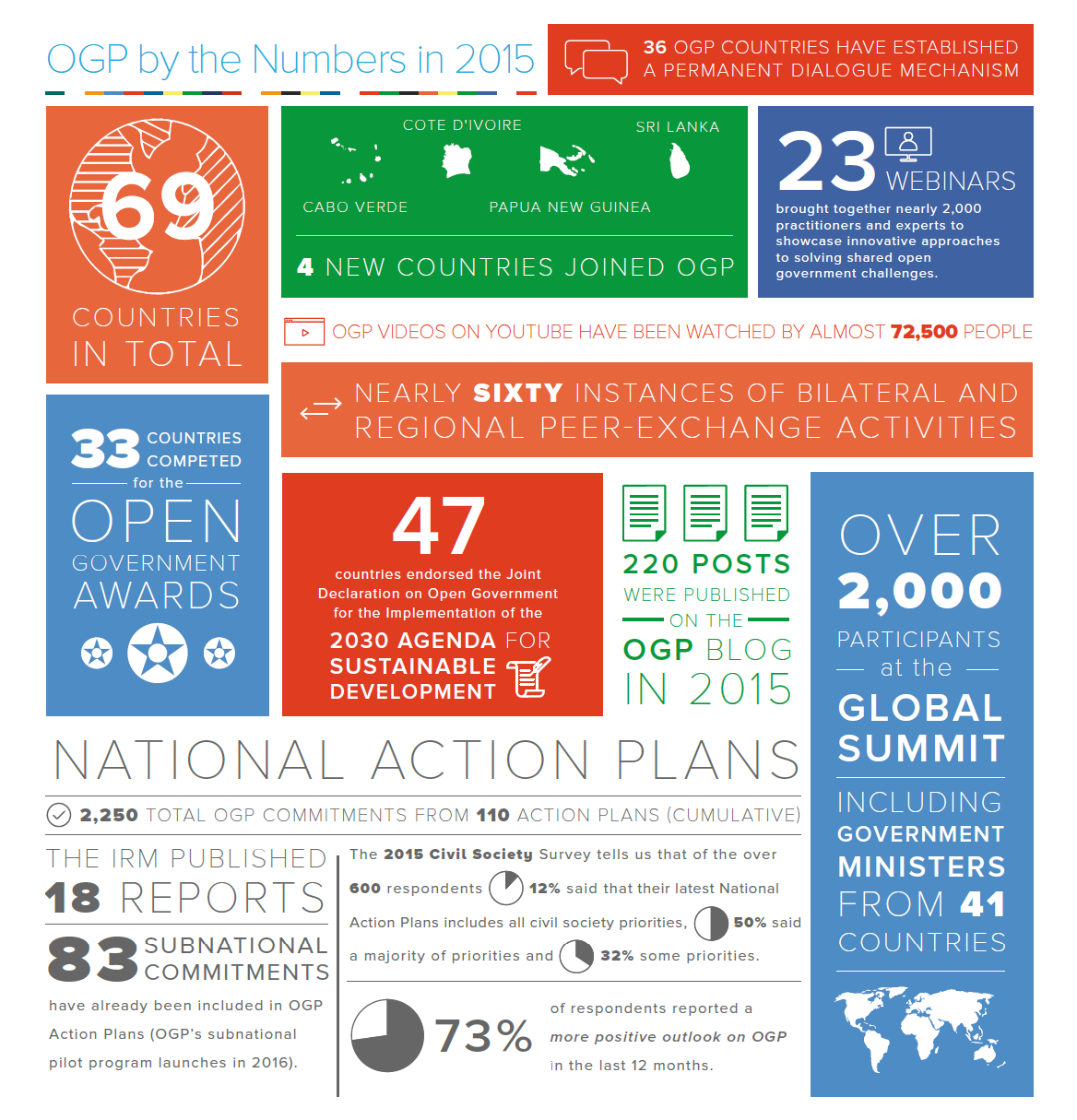 In 2015, the Open Government PartnershipThe Open Government Partnership (OGP) is a multi-stakeholder initiative focused on improving government transparency, ensuring opportunities for citizen participation in public matters, and strengthen... More (OGP) grew to 69 countries that have collectively developed more than 2,250 commitments to make governments more open, transparent and responsive to citizens. In OGP’s fourth year of operation, many countries are continuing to show a strong commitmentOGP commitments are promises for reform co-created by governments and civil society and submitted as part of an action plan. Commitments typically include a description of the problem, concrete action... to the initiative. Twelve countries submitted their second National Action PlanAction plans are at the core of a government’s participation in OGP. They are the product of a co-creation process in which government and civil society jointly develop commitments to open governmen... and, for the first time, two countries — the Philippines and the United States — submitted a third Action Plan. The partnership as a whole continued to grow stronger, with record-breaking attendance at the third Global Summit in Mexico City, where a new subnational government pilot program was launched.

The Global Summit in Mexico was the major moment for OGP in 2015. The summit was hosted by the President of Mexico and Mexican civil society organizations who welcomed over 40 ministers and leaders from around the world. Highlights included the second annual presentation of the Open Government Awards, with first prize given to a Uruguayan project providing citizens unparalleled access to the performance indicators of their country’s health care providers. OGP also moved swiftly to position itself as one of the main implementing partners for the United Nations newly agreed Sustainable Development GoalsOGP countries are experimenting with open government innovations to accelerate progress on the Sustainable Development Goals, particularly SDG 16+ which includes peaceful, just and inclusive societies.... Over 40 governments signed a declaration committing to use the OGP platform to implement the new global goals, and OGP published a special edition of the Open Government Guide to provide ideas on how to achieve this. Civil society leaders also had a prominent role, ensuring that issues of closing civic space, anticorruption, freedom of the press and access to justiceAccessible justice systems – both formal and informal – ensure that individuals and communities with legal needs know where to go for help, obtain the help they need, and move through a system tha... More were addressed on the main stages.

Throughout 2015, the Support Unit and Independent Reporting Mechanism (IRM)The Independent Reporting Mechanism (IRM) is OGP’s accountability arm and the main means of tracking progress in participating countries. The IRM provides independent, evidence-based, and objective ... staff continued to provide international coordination and accountability, while also contributing an increased level of support to government and civil society reformers at the country level. This included coordinating nearly 60 instances of bilateral and regional peer-exchange activities, promoting a wide array of educational tools including webinars and handbooks, and helping the spread of good ideas from OGP partners through events and different communications channels.

The OGP Steering CommitteeThe Steering Committee is OGP’s executive decision-making body. Its role is to develop, promote and safeguard OGP’s values, principles and interests; establish OGP’s core ideas, policies, and ru... provided strategic leadership to the initiative, with guidance from the lead co-chairsThe leadership of the Steering Committee is made up of four co-chairs who provide strategic guidance and support to advance OGP’s overarching priorities. Co-Chairs serve two-year terms beginning on ... — the government of Mexico and Suneeta Kaimal from the Natural Resource Governance Institute. The support co-chairs were the government of South Africa and Alejandro Gonzalez from Gesoc. Other countries played major roles in supporting OGP in 2015, including Georgia, where the then Prime Minister Irakli Garibashvili hosted a European Regional Meeting, and Tanzania, where the then President Jakaya Kikwete hosted an Africa Regional Meeting. High-level leadership was also extended through the appointment of Winnie Byanyima, executive director of Oxfam International, as a new OGP Ambassador.

In July 2015, OGP held its second election of governments to join the Steering Committee. The governments of Chile and Romania were elected for the first time, and Indonesia was elected for a second term. The governments of the Philippines and Tanzania stepped down. Two civil society Steering Committee members, Cecilia Blondet (formerly of Proética, Peru) and Fernando Straface (formerly of Cippec, Argentina), stepped down from their roles because of changes in their jobs. Alvin Mosioma of TaxPlacing transparency, accountability, and participation at the center of tax policy can ensure that burdens are distributed equitably across society. Technical specifications: Commitments related to c... JusticeTo address barriers that prevent citizens from having their justice needs met, OGP participating governments are working to expand transparency, accountability, and inclusion into all systems of justi... Network Africa stepped down due to time constraints. These vacancies will be filled shortly.

2015 also saw the departure of Linda Frey as executive director of the OGP Support Unit. During her tenure Linda built up OGP’s infrastructure to include a talented staff, and developed an ambitious four-year strategy and a solid financial footing. Following an intensive international search, Sanjay Pradhan was tapped to lead the OGP Support Unit, starting mid-2016.